Autumn is in the Air!

The nights are getting chillier and if one looks closely, one can see the change in color of vegetation. The goldenrod are blossoming and the leaves of the blueberry bushes are turning crimson. The grapes are now ripe and while I am writing this my industrious husband is making grape jelly from our grapes. All while I study and practice the German language!

It is said that learning a foreign language stimulate brain cells. I thought I'd start at a good point, having studied some German in the past, albeit 49 years ago since I was last in contact with the language. I am finding it logical and sometimes difficult to remember long vocabulary words. But, "practice makes perfect," as my German professor reminds us.

Below is a quilt that I made about 20 years ago. It is an appliqued quilt (needleturn technique) and is a Piecemakers' pattern. I sent it off to a friend of mine but I remember the fun I had in making it! I especially enjoyed hand quilting the swirls in the sky, representing the wind. If I remember correctly, I used a piece of felted wool for the girl's jacket and tiny buttons that would be used in doll making. The broom was fun to applique, too, and I enjoyed using Pigma pen markers to bring "her" facial features to life. The swirling leaves reminded me a New England day in autumn with the various colors of leaves, some still green but blowing off of the trees anyhow. Luckily, I had the "brick" fabric in my stash! All in all, this was a fun project and it brings a smile to my face to recall the joy I had in making it and sending it to a special friend! 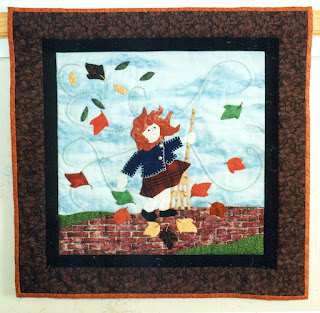 "Helping the Women of Afghanistan - Rubia: An International Outreach Project" is the name of an article I wrote for The Quilter magazine that was published in January 2007. The Afghan woman I interviewed, whose name I will not share here now (for her safety), was in the United States to promote the organization called "Rubia," a group comprised of needleworkers who sold embroidered pillows to raise money for literacy and health programs in their country.

I was lucky enough to hear one of the four talks the woman gave at New Hampshire libraries between August 21 and 26, 2006. She was the assistant director of Rubia, at the time. She had 12 years of schooling, unlike most Afghans. In fact, only five to fifteen percent of Afghan citizens can read or write. At that time, children (mostly male) attended school for about two hours per day in crowded classrooms doing rote work, but not exercises involving creativity or critical thinking.

Rubia encourages the individual artistry of program participants, who embroider traditional motifs from various Afghan regions, such as Kyrgyzstan, Uzbek, Uzbek Lakai, Tajik, and Turkomen. Some of the women even draft their own designs and they are encouraged to embroider their own logo, often a flower motif, on the back of the pillow, and sign their name or initials in Persian.

Safety for women and girls is always an issue, and they generally do not go out by themselves, even to attend school. In this male-dominated society, everything a woman does must be approved by her father, brother, or husband.

Living in windowless rooms, engineered that way for safety, and wearing burqas when they leave the house, the lives of many Afghan women have traditionally been ones of isolation and darkness (on more than one level). Even before the Taliban occupation in 1996, women wore burqas in public. These over-the-head garments limit vision and have only a small opening through which to see and breathe. The burqa is usually viewed by westerners as a symbol of oppression, so it is surprising to learn that Afghan women actually like to wear them, since they provide a sense of security and anonymity.

In 1996, the Afghan government, which had been backed by the Soviets, was overthrown. With the financial backing of the United States, competing warlords or so-called "commanders" from the Mujahideen emerged. When the Taliban, a militant Islamic group, subsequently took over the country, they were viewed as having restored civil order. However, it was not long before the Taliban occupation was seen as a violent regime that enforced a strict version of Islamic law.

When the Taliban entered her town, the woman I interviewed and her family raced into the streets and ran until they reached neighboring Pakistan, a country where they lived as refugees for seven years, before they eventually returned to Afghanistan.

Today, the country of Afghanistan is in turmoil. The whereabouts of all of the women of Rubia is questionable. Their motto was "Mending Afghanistan Stitch by Stitch" and, with any luck, the organization will be able to continue to bring literacy, hope and the celebration of artistic expression to the women and children of Afghanistan, in the future.

This article was excerpted from one previously published in The Quilter magazine. In the original article, many photos of Afghan pillows were shown, as was a 41" square piece of Afghan patchwork, possibly circa 1960, comprised of silk, cotton, and linen fibers, probably of Chinese or Soviet origin.

Our hearts go out to the people of Afghanistan for all that they are now enduring.

Posted by quiltersmuse at 1:09 PM No comments:

Contemporary Quilts made by Windsor County Quilters and Challenge Quilts by the Heart of the Land Quilt Guild are featured in the 35th Annual Quilt Exhibition at Billings Farm & Museum in Woodstock, Vermont. The display is open daily from July 17 - August 22, 2021.

Here are just a few of the quilts that currently hang in the exhibit.

"Farm Friends" made by Lynne Weatherill is machine-pieced, paper-pieced, hand-quilted, and tied. It is her first paper-piecing project and she found it challenging at first. There are as many as 57 pieces in just one animal. 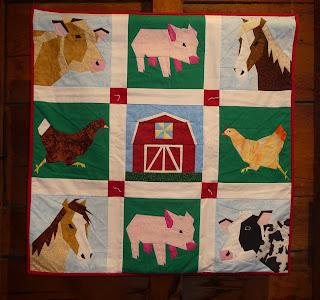 "Berkeley" by Linda Diak is appliqued and machine-quilted. It is a portrait of a Berkshire pig and is based on a photo posted to the Billings Farm & Museum website. Berkeley is no longer "on the planet" but he lives on in memory. The quilter was able to use supplies she had on hand during the pandemic to create this quilt. 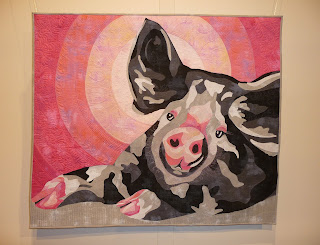 "Timeless Ties" by Sue Cass is a memory quilt made to honor the deceased husband of her friend, Patricia. Seventy ties were used in its creation. The quilter chose to make Dresden Plate and Fan blocks and used leftover scraps of ties to create the borders. The quilt is machine-pieced, appliqued and machine quilted. 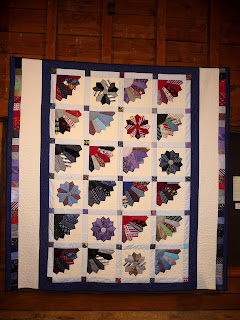 As always, we enjoyed seeing the fine work of Windsor County quilters! There is always a lot of variety in this show. We especially liked the farm-related quilts this year and we like quilts that come with a "story."

The Billings Farm & Museum  is located at 69 Old River Road in Woodstock, Vermont and is well worth the trip. Check out their website at www.billingsfarm.org

Posted by quiltersmuse at 8:51 AM No comments:

With sweltering temperatures outside, my thoughts turn to ice cream and Christmas, maybe not in that order. I am thinking of a quilt I made in 2014. It features a Redwork embroidery motif of birds and holly. The design is a very enlarged version of a line drawing that was published in the Cunnings catalog, a late 19th century catalog from which one could order designs for outline stitch embroidery (another name for Redwork). The catalog features thousands of designs or so it seems! There are many monograms, flowers, owls, Japanese-themed motifs and other designs. 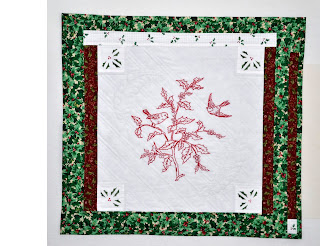 Anyhow, this particular image of birds appealed to me, being a bird-lover and all. I enjoyed hand-quilting this quilt. Anything to help me dwell on the delights of cooler weather and the coziness that Christmas holidays bring when it is snowing outside and we do not have to go anywhere. At that time, it is fun to listen to Christmas music and do some quilting in the den. As humans, we always want something else. In winter, we long for summer but when summer arrives, it is often overrated because of torrential rains, thunderstorms, and high temperatures. For now, I am dreaming of Old Man Winter visiting again as Jack Frost coats our windowpanes in frosty designs!

Posted by quiltersmuse at 11:30 AM No comments:

The "Woodland Creatures" quilt that I designed is now finished. I asked Janet-Lee Santeusanio of Woodland Manor Quilting in Hampton Falls, NH to machine-quilt it for me. I think she did an outstanding job! This is a just-for-fun quilt. I chose Hobbs 80/20 batting. Here are some photos. 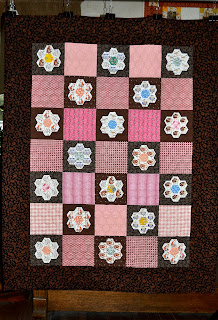 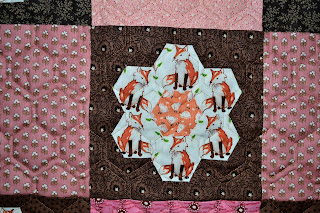 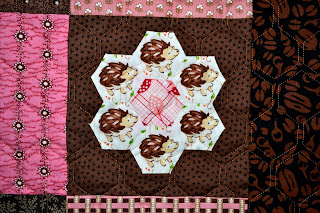 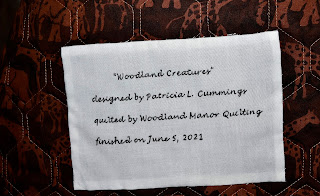 Posted by quiltersmuse at 6:36 AM No comments: